The 7 deadly sins of trading 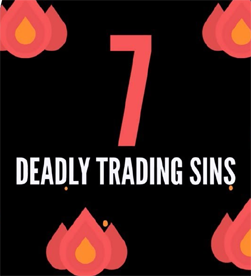 Risking a fixed percentage of your account is something that many forex trading sites talk about, and this is what many forex traders do. However, the reality is that this isn't a perfect approach, and it could condemn you to a cycle of poor performance.

The main reason that most traders think that risking 2% or a fixed percentage of their account is a good idea, is that they think it allows them to increase their position size gradually when they build their account, or decrease their position size gradually when they lose money. While the first point may make sense, the idea of ??reducing the size of your position after each losing trade doesn't make much sense. Imagine that you have lost 50% of your capital (this happens, as you probably know), so you must then obtain a performance of 100% just to get back to your initial balance. For people who use the 2% rule and have lost 50% of their account, this same 2% risk will now translate into a 50% reduction in position size.

So your task now is to make 100% in your account with a position size that is 50% smaller - just to break even! If you don't understand what I'm getting at here, it's that the 2% rule keeps you in a rut after a series of losing trades. Yes, this allows you to reduce the size of your position after losing one or more trades, but why do you want to automatically reduce the size of your position after each losing trade? It's like saying that just because you've lost 4 trades in a row, you think you're going to lose the next 4, so you'd better reduce your position size. This goes against the fact that if you have a randomly distributed trading advantage, you never know for sure when you are going to have a winning or losing trade. So the 2% rule may be suitable for new traders who want to learn slowly while limiting their risk, but for traders who have some experience and have mastered their trading edge, it just doesn't make sense.

The best way to assess how much you should risk per transaction is to simply risk what you feel comfortable with. Ask yourself if you can manage 10 losses in a row on your current amount of risk per transaction, if you can manage that and not get emotional or blow up your account then your risk level is probably correct. So forget about the 2% rule or any percentage per transaction, it's a "deadly sin" that will keep you in a rut after a series of losses and it goes against the fact that we never know what will happen in the next trade. When you blindly reduce the risk after each losing trade, it implies that you are assuming that you will continue to lose, which is not necessarily true! We want to measure risk in dollars (or pounds, or euros, or...), not in pips or percentages.

2) Being a greedy idiot

Greed is one of the original "7 deadly sins", so it's not a surprise that it's also a deadly sin in the world of trading, after all, it's human nature to become greedy when money or material things are involved. Most traders are no different from casino players - they're all looking to hit the "jackpot". It's an addictive game that doesn't leave you until you get out of it one way or another, usually after losing a significant amount of money.

It's time to be realistic and stop chasing the big winning trade because it will more than likely never come. If you take a risk/reward ratio of 1/2 or 1/3 on most of your trades, that's fine. It is actually a "professional standard", and there is absolutely nothing wrong with that! The longer you continue to chase after the elusive big trade, the longer you will stay in a cycle of losses and small gains when the market turns against you. So start by being realistic and stop committing the sin of being a money-hungry idiot.

Traders who day-trade or scalp are traders that are already trading for a living and that have therefore perfectly mastered swing trading on long-term charts.

For a trader that's new to the game, day trading or scalping is a deadly sin, because when new or struggling traders start scalping on 5 or 15-minute charts, it's literally just a matter of time before they blow up their accounts. Most of the time, inexperienced traders use scalping until they have lost so much money that they end up switching to longer term charts or give up altogether.

4) Using a combination of technical indicators

Some traders use multiple technical indicators which complicate their charts. Abandon your lovely indicator system and move on to something more logical and real. Most people who continue to trade long enough come to understand that they are not helping themselves by adding tons of indicators to their charts. They are gimmicks, they look good, but in reality they just waste your time and hide reality. This complicated and messy trading method is a deadly sin!

Our next deadly sin is arrogance - many traders are victims of this sin and it ends up costing them dearly. Some traders make very common emotional trading mistakes, but they don't seem to know that they are doing something wrong and are confused as to why they are losing money. In other words, they are blinded by their own arrogance and are playing a game of pretending that they are professional traders even if their account balance says otherwise.

The first step to solving your trading problems and avoiding all these "sins" is to just admit that you have a problem and that you aren't doing what it takes to be successful in the markets. Many traders cannot even get there because they simply cannot swallow their pride and ego. They don't want to face the fact that they are behaving like gamblers, even if they do know it deep down inside.

You have to be ready to "clear the slate": stop pretending that what you're doing is working, and start from scratch. Humility is a major asset for trading, but for men this can be a problem, as we tend to "need" to be right all the time. This sin of arrogance and impudence is certainly especially widespread among male traders. So, guys once again, it's time to follow the example of the ladies and check your ego before you walk into the trading floor.

This is the last of the 7 deadly trading sins and perhaps the most common and most damaging one as well. Many traders love to over-analyse, over-trade, add to their debt, and are generally too involved in everything related to their trading. By thinking too much and getting too involved in their trades, most traders feel they "control" the market, which makes them feel better. The problem is that you cannot control the market, but only yourself, and what you feel has nothing to do with the outcome of your trades. The market doesn't care about your feelings, your money problems, or the fact that you are trading with money that you cannot afford to lose. So keep that in mind when you've been sitting in front of your charts for many hours instead of sleeping - ask yourself "Am I really doing a valid and necessary market analysis now or am I am I just too involved and thinking too much?"

Another problem traders face when they think too much is that they are afraid to trade or find it difficult to pull the trigger. Whether it is the fear of entering into a perfectly valid trade or the fear of closing it, many traders face "paralysis" in the markets. This means that they end up thinking in circles and doing nothing because they flood their heads with so many thoughts that they literally become mentally paralysed. Once you realise that you have to operate from a trading plan (that is objective and logical) that you have developed outside of the markets, things will seem easier to you. The most important thing to realise is that you should not think too much about your trades; have a plan of attack and follow it, do not sit there changing your mind with each movement of the forex.

I hope you have learned from today's article and realised that you're not alone in experiencing both frustration and loss. It only takes a simple adjustment of your attitude and expectations to end these 7 deadly sins and any others that you might be committing.